I order stuff. You know, the stuff everyone orders. Books. Some toys for the pets. Freshly roasted coffee beans. A couple kitchen implements to replace the ones I tossed because they came from a previous century and didn’t work. The problem isn’t the stuff (although… sometimes it is; but that’s another post) – it’s the BOXES. 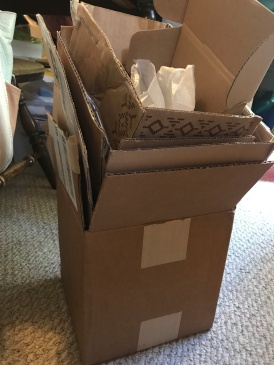 Here’s how it often goes. I perceive some gap in my stuff-age: the dog bed has a hole, or a there’s a new book on a topic I’m diving into, or my favorite kitchen fascinator goes kerfumpf and I want a replacement. I order the stuff. I get the stuff. And stuff is good. And it came in a box. It’s a nice sized box, and kind of sturdy and I think “Hey – that’s a nice box!” And so the stuff gets put away, but the box starts a sit-in, usually somewhere in the vicinity of the kitchen table.

That’s how the trouble begins. Soon it is joined by a brethren of other “nice boxes”, waiting for their chance. Maybe X’s birthday is coming up and I know I can ship a gift in one of those… I’m not sure which one… I know I’ll need to carry a load of books to work next week; I can use one of those. Maybe. If the box is big enough, that’s when the cats start playing in or on them. (I can’t get rid of them now; the cat likes them!)

Eventually, there’s a leaning tower of cardboard I’m stepping around every time I walk by the table and I have finally had enough. They gradually head out the door to be recycled in manageable arm loads… usually just in time for me to order more stuff.

Life happens. It may not come with a bow, but it often comes in a box.

Stay tuned for more on the Here’s a Quarter blog next week! As always, your thoughts and comments are always welcome – they are moderated (I know – adulting again), so they may take a little while to appear, but I read them all and appreciate that you were here. Thank you!

One thought on “Out of the Box”