Here’s one of the reasons I need to spend more time on the house. I got a lesson in

organization – or maybe disorganization – one morning from a feathered friend. A red-headed woodpecker, a gorgeous bird with a ruby-red hooded head and snazzy black and white back showed up near my house this spring. When he first showed up, I grabbed my big camera and took a couple pictures from too far away. When I saw him again a few mornings later I ran to get a bigger lens to get a few more images. I grabbed the camera, shrugged off the lens cap and flicked it on… And the battery was dead.

Well, that’s OK – I could just get one of the spares. I use this camera for wildlife and travel photography; I have two spare batteries. When I can find them… For reasons that weren’t clear to me, I couldn’t find the batteries in the carrying case for the camera. And they weren’t in the other case I sometimes use. Meanwhile, the woodpecker flew back and forth a few times and then it started raining. Like most sensible creatures, he retired to a more comfortable setting and I was out of luck.

So I started looking for the batteries. That was a trip down the rabbit hole. I spent an hour taking apart piles of stuff, trying to get to other stuff, and generally moving stuff and not finding the batteries. Ack! At one point I was leaning over a box of books to look in the guest room dresser – not there. But it reminded me that I used a favorite vest while I was shooting – maybe they were in there. So then I had a twenty-minute search for the vest, which I had just seen about two weeks before. I knew it was in my bedroom – which is not that big – and I couldn’t find it because the stack it was in had at some point slid sideways and the vest dropped down next to the bed. When I reached down there, I did find the vest – but not the batteries. I still didn’t know where they where.

This is incredibly frustrating. It annoys me that a vital piece of equipment for a hobby I love went missing because I didn’t have an organized method of storing all the bits between trips. I love my photography enough to name all of my cameras (meet Olive, R2, MonsterCam, Yukon, and Raven – yes, there are five ponies in that stable) – it is embarrassing and ridiculous that I somehow lost two batteries within 20 feet of the camera, but there was so much crap to wade through, I figured it could take another several hours to figure out where.

I last used the spares when I was in Iceland last summer. I found all of the other camera accessories from the trip. Just not the batteries, probably because they’re small. I checked my suitcase, thinking they might be in the pockets. Nope. I looked in two other camera cases. Nope. I checked the bin that has some of the older chargers and the drawer that has my electrical adaptors. Nope. So I was stuck hoping they were someplace they really shouldn’t be for reasons I could not remember.

It drives me nuts when I do stuff like that. Some mornings it takes me twenty minutes to get into the car from the time I think I’m ready until I actually get out the door because I have to search for my keys and then when I find them I have to go searching for the cell phone I put down while I searched for the keys. Nuts. So I hoped these batteries were where I was looking, just less obvious than I’d expected. Because if they weren’t, the search would have to move into the office. That would not be pretty.

Postscript to this and another lesson: In packing for my trip to go photograph loons six 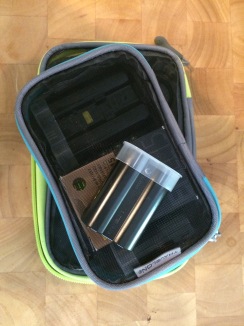 weeks after the woodpecker debacle (see Detour), I had to reorganize my camera bag and I took everything out. That’s when I found my two spare batteries exactly where they belonged; they had dropped under a large divider in the case and weren’t obvious when I was tearing through there. In the panic of the moment, and knowing my penchant for disorganization, I’d overlooked them. In addition, because I needed spare batteries for the trip, I’d already ordered more spares. This camera is now rocket-powered and I’ve had another lesson in how disorganization can cost more than time.

To keep this from happening again, I got a couple nifty little zippered cases. The camera batteries all go in one, and can be slipped into my carryons for air travel (new TSA regulations – check before you go!). The other is for all the charger cords so that none of those go missing… Don’t even think about it. Lesson learned!

Stay tuned for more on the Here’s a Quarter blog next week! As always, your thoughts and comments are always welcome – they are moderated (I know – adulting again), so they may take a little while to appear, but I read them all and appreciate that you were here. Thank you!

3 thoughts on “Red-Headeds and Rabbit Holes”